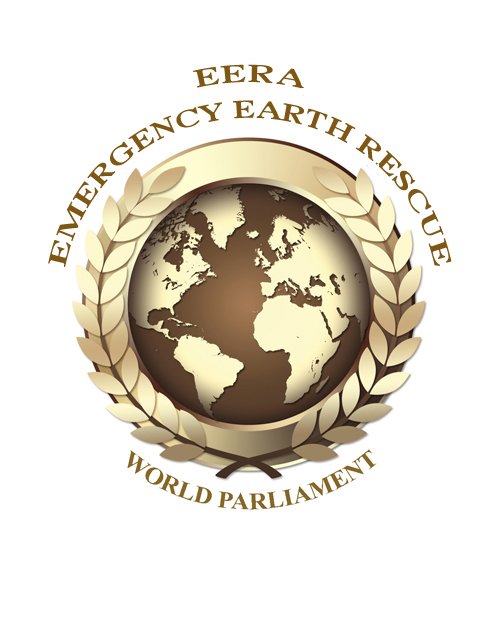 ​EMERGENCY EARTH RESCUE ADMINISTRATION
The people of Earth have a new common enemy, which requires an emergency world-wide campaign in which both East and West, North and South, must abandon armaments and join in common cause for survival.
The new Common Enemy is the rapidly accelerating increase of Carbon Di-oxide (CO2) in the atmosphere, which is already resulting in cataclysmic climatic changes.
The climatic and resulting catastrophes, which could become irreversible within a decade unless the “greenhouse syndrome” of accumulating CO2 is reversed, include:
• Widespread drought, which is likely to continue relentlessly year after year, and to devastate more and more countries;
* Rapidly spreading deserts and forest die-outs;
* Many erratic weather extremes, together with high winds and forest fires, all serving to make agriculture, food production and living conditions difficult;
* Repeated crop failures in the temperate zone “bread baskets” of the world;
* Massive starvation for hundreds of millions of people, beginning in the poorer countries, but spreading to the developed countries as food supplies run low;
* Excessive evaporation from oceans in the lower latitudes, then drawn by air currents to higher latitudes where precipitation as snowfall will increase under continuous cloud cover, thus resulting in accumulations which will turn to ice;
* The unexpectedly rapid onset of a new ice age;
* Vast areas become uninhabitable, leading to attempted mass migrations of people, but nowhere to go;
* Soon the pressure of growing ice fields on Earth will result in increasing volcanic eruptions at release points spewing great quantities of CO2 into the atmosphere, and pushing the whole process beyond the point of no return.
SEVERAL CONCURRENT REASONS FOR THE RAPID INCREASE OF CO2 IN THE ATMOSPHERE INCLUDE:
• Rapid de-forestation, due to over-cutting for fuel, lumber, and conversion of forest land to the raising of cattle for beef, particularly in the tropics and sub-tropics where vigorous forest growth is particularly critical to hold the CO2 in dynamic balance;
• Weak and un-healthy forest growth, resulting from general soil-demineralization worldwide, together with acid rain and other pollutants. Healthy forest and tree growth is necessary to keep the balance of CO2 in the atmosphere, because trees take in CO2 and store carbon in the process of growth.
• Burning of fossil fuels, both coal and oil, which releases stored carbon in CO2 form.
• General loss of top soil and soil fertility, leading to generally less healthy plant growth, which is then unable to use up as much CO2.
• Heavy meat eating diets, which are increasing as affluence spreads, which puts economic pressure for conversion of forest lands to cattle raising and other meat production.
We recognize that present day civilizations have developed during an inter-glacial period of little more than 10,000 years, and that another ice age might ordinarily be expected to recur from natural causes, as in the past history of the Earth. In the present circumstances, however, the actions of people are hastening the advent of another glacial period. At the same time, it may be equally possible for people to prevent a new ice age from overwhelming civilization by taking appropriate corrective steps now to restore a dynamic balance.
THEREFORE:
1. AN EMERGENCY EARTH RESCUE ADMINISTRATION IS HEREBY CREATED.
View  EMERGENCY EARTH RESCUE ADMINISTRATION, World Legislative Act #6
Powered by